I just figured out that I always show my work in progress, but I never show the car when it is working. So here it is, a small video showing the car as its current status.

I totally rewrote the iOS application. I wanted to make some big changes with the software architecture, and I decided it was a good opportunity for me to learn deeply the Swift language. So I rewrote everything from Objective-C to Swift.

the RPi + daughter board

And for those who don’t want to read my previous post and want to know what I am talking about : I took a RC car, removed the radio part on the car, and replaced it by my own hardware. This now allows me to pilote the car with an iPhone or an iPad, and with a video feedback from the camera I installed on the car. And here is how it works :

I thinks that’s it for now. So the only thing in the list above which does not work yet is the PID controller for the motor, everything else works. I also have to mention that each system (the Raspberry Pi, the iOS application and the PIC) has its own failure management, each of them is able to detect if it is still communicating with the other parts, and if there is a problem of communication, the car is stopped, and the servo and the motor are put in an idle position. The iOS application and the Linux software react in 1 second, and the PIC reacts in 200ms.

Sorry for the long post, and I don’t have any potato. Next step : the PID controller, stay in touch.

I haven’t posted on my RC car since a while; but I have made a lot of improvements : 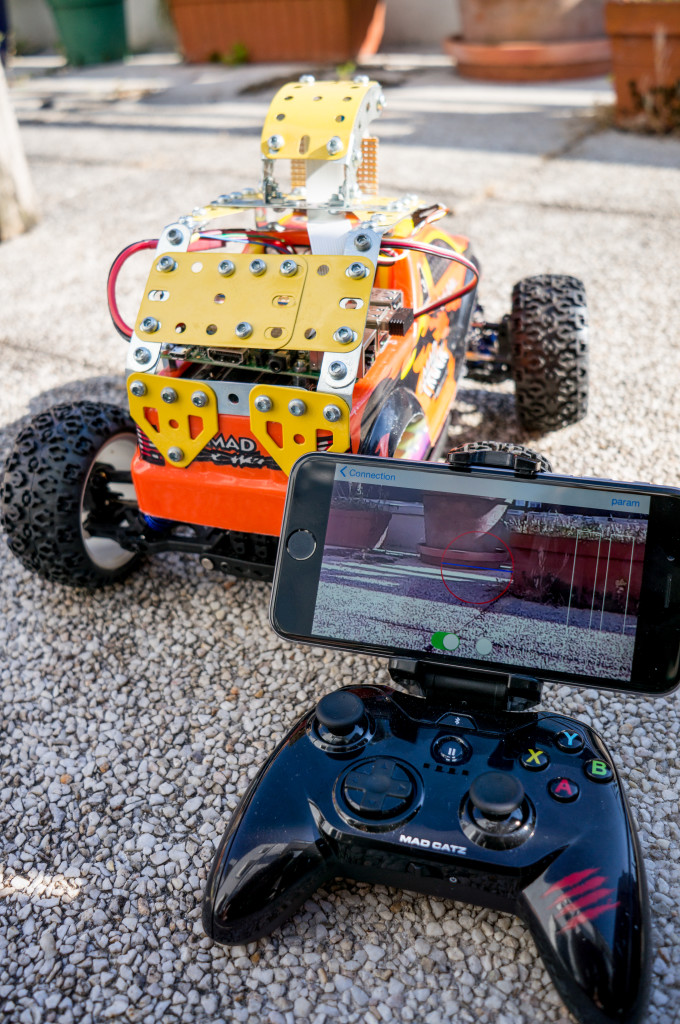 I improved a lot the stability on both side, and it is now much more secured; disconnection is detected on both car side and iOS side, and the car stops immediately.

The iOS application is now universal and works on iPhone and iPad (but I almost only use it on iPhone now).

I added the support of bluetooth game controllers on the iOS app. I have a Mad Catz micro CTRL and I must say it changes everything; it is now very easy and natural to control the car with it.

Also thanks to Apple and its Game Controller framework, it took me only maybe 1h to add this feature in my app, it is very easy to use.

And yes, after all I added the video streaming from the Raspberry Pi to the iOs app. This was a big challenge. First I tried to use vlc to stream from the RPi, but I add a terrible latency, something like 2 seconds, which was not acceptable to be able to control the car remotely ! So after some research, I found GStreamer, it is an open framework which offers lots of feature regarding video live streaming, and it can have a very low latency for streaming ! GStreamer is available on all OS (Linux, Windows, iOS, Androïd). So I have gstreamer on both side, one arch linux version on my RPi, and one iOS library on my app.

Unfortunately, the pre-build versions available are outdated a lot, so I had to build my own version for iOS. I won’t detail how to do so, this blog does it well : https://tausiq.wordpress.com/2014/12/11/ios-gstreamer-framework-custom-build/.  The only problem I still have with the iOS library is that it does not support iOS 8 sdk, it only support iOS 6, so I have to build my whole app for iOS 6, and this is not very convenient; I hope the gstreamer guys will fix this soon.

On the Raspberry Pi application, once the car is connected to an iOS app, I launch the gstreamer command line utility gst-launch (with execvp in a child process), with  rpicamsrc as a video source, it is a gstreamer plugin made to use the Raspberry Pi camera as a video source. So my parameter on the raspberry pi are (the host is the iOs app ip address and I change the port on every new connexion, so I never have troubles with disconnection/reconnections) :

On the iOS app, I use the gstreamer sdk; I won’t detail how I use it, I just did as in the tutorials and examples you can find on the web; but I just give my parameter to create the pipeline (because this was were I had to try lots of different configurations, so if anyone wants to do the same, you can use my parameters on both sides, it works well) :

And this is it, the streaming works well, with a very low latency (and I am on a wifi connection !) and a quite good quality, it is enough to be able to drive the car with only the view from the camera !

Yes, more to come soon (or at least I hope). I totally re-designed the hardware on the car.

The PCB design is finished, I just sent it for manufacturing, and I might receive it in 3-4 weeks, so more news then …

I almost forgot, but if you are looking for a new (maybe longer) ribbon cable for the Raspberry Pi camera, there is a good chance you cannot easily find one with 15 contacts. In facts I found out those ribbon cables come from Würth Elektronik, you can find them here : http://katalog.we-online.de/en/em/686_7xx_xxx_001

And as usual, I didn’t detail everything, but if you are trying to do something similar to me, and are facing the same problems, do not hesitate to ask, I spend a lot of time on this project, so I would by glad that my experience can help someone else.